With a degree in Sports Therapy, Charlotte has an understanding of how the body works whilst dancing. Dancing for as long as she can remember, she has a background in contemporary dance, Tap, Jive, 20′s Charleston with a natural flair for Authentic Jazz. Of course, Charlotte’s main passion is Lindy Hop, with a real fun teaching style where every follower who experiences her classes loves her unique focus on followers technique, styling and her mass of follower variations.

Charlotte teaches weekly Lindy Hop classes and workshops in Hertfordshire and the Middlesex/North London area, along with specialised workshops for schools and universities, but has also taught and performed for organisors at major events across the UK and abroad in Norway, Belgium, Germany, Prague, Slovenia, Israel and Switzerland over the last few years. At only 25, we think this makes her the UK’s youngest international teacher.

Charlotte has also undertaken TV work, featuring in the BBC’s hit documentary Wartime Farm, performed at the the world famous Royal Albert Hall, plus some of London’s most prestigous events such as the Ideal Home Show and Canary Wharf. She’s also featured dancing in Channel 4′s infamous Come Dine with Me, national TV adverts such as Dreamboat and Petticoat’s 5 (also appearing on the front cover), and was chosen for the lead role in the Yolanda be cool – Sing Sing Sing music video.

Charlotte is a keen performer, as part of the JiveSwing All-Stars and also as the founder and choreographer of the UK’s latest female Authentic Jazz dance group, Charlie’s Angels.

Charlotte is now working on her new series of workshops specifically for followers called Sista’s of Swing.

Watch out, as you’ll probably hear Charlotte screaming during an aerial or on the dance floor somewhere. 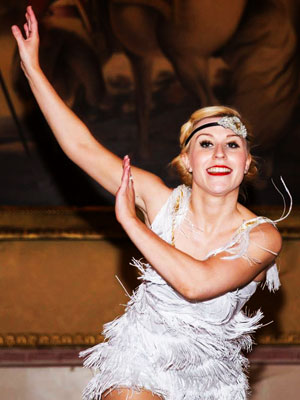