Alice started dancing at 4 years old. From 4-14yrs old she had the honor of interpreting almost every single Disney Character from “Dopey” to “Tinker-Bell”.

She eventually joined a national dance school for another 4 years where she practiced Ballet, Contemporary and Jazz dance daily. Slowly burning out with these dance styles, she began to look for something new. After a few unsuccessful attempts at african dancing, flamenco, and kick boxing she eventually met her true love, Lindy Hop!

Meanwhile Alice was studying to become an architect and working in the beautiful south of france. She was sharing her time between dance and architecture when the opportunity arose for her to dance full time. With some slight fear and hesitation, she took the leap, and pursued what she loved the most. She has since been touring and teaching full time living the adventurous Lindy-Lifestyle.

Alice is definitely at her happiest when she is swingin’ it on the dance-floor. You will most likely hear her giggling from the other side of the room when she is social dancing. Alice enjoys keeping her dancing simple and natural. It seems like her silliness has reached enough people since she won the “dancers choice award” at ULHS in 2006. In class, she teaches the same principals that she cherishes as a dancer and she mainly focuses on keeping things simple and in rhythm.

As a person, alice is a joyful shop-a-holic who lives in the moment. She enjoys the most simple things in life such as chocolate (specially “Lindor” ), beer and lame garden statues. A bit of a geek, she likes to play video games, but her favorites are still the most simple ones like Tetris and Lemmings. Emotional, sensitive, fun and natural…here are some adjectives to describe Alice and if there is anything else you wish to know about her, just ask her and she will most likely tell you. Alice is like an open book, and whatever she is not telling, you might still be able to read on her face. Don’t abuse it though cause you might discover a little evil hidden behind her angelic smile. 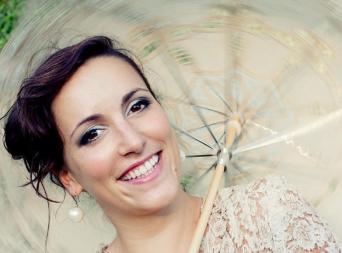